What would you say if someone told you seizure-free outcomes following epilepsy surgery could be improved by almost 100 percent simply by downloading some free software? That is exactly what the Cook Children's Comprehensive Epilepsy Program team did when they instituted the use of multimodal coregistered imaging protocols in 2009. Their results are published in Epileptic Disorders (volume 19, issue 1), the official journal of the International League Against Epilepsy.

Using freely available software, the team took imaging data sets for each patient (i.e., MRI, PET scan, SPECT scan, magnetoencephalogram) and blended them into a single image (Figure 1). They then compared seizure-free outcome of patients evaluated before and after 2009, when the protocol was employed while controlling for other variables that can impact outcome. Their research proved that using this technique improves recognition of subtle brain abnormalities, which may have been missed if images were viewed alone, allowing for more complete resection of the seizure onset zone and better outcomes. Following initiation of this protocol in 2009, patients seizure-free two years after epilepsy surgery increased from an average of 40 percent to over 75 percent of patients (Figure 2). 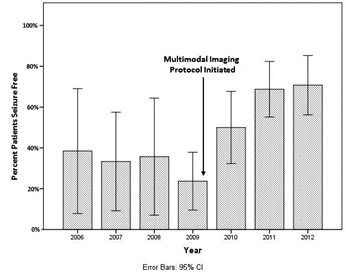 The team also saw a significant reduction in the need for invasive EEG monitoring – thus allowing more children to be treated with a single surgery and avoid the risks of multiple surgeries. This research represents one of the first series to demonstrate that multimodal coregistered imaging can improve patient outcomes and support its use as a routine portion of presurgical evaluation.